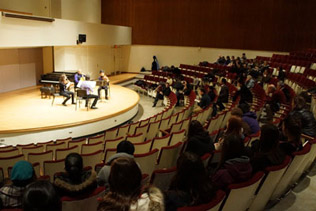 A generous gift by Dr. Swee Chua Goh in commemoration of late Lilian Wei-Chee Goh (nee Sung) promises to bring a new Hamburg Steinway piano for Walter Hall in the Faculty of Music for Fall 2022.

For many, a modern concert grand piano isn’t just a musical instrument, but an icon with many contexts; since the early days of hand-made parts mounted on wooden frames, today’s concert grand stands out boldly on the stage, easily withstanding up to 70,000 pounds of tension across its body. Its dramatic shape and rich repertoire are very alluring to both performers and the audience.

“An instrument, whether a piano, cello, marimba, bassoon, trombone, one’s own body, etc., is the medium through which musicians communicate to each other and to audiences. As an extension of the performer, an instrument makes possible the communication of so much that is beyond words, but which in some way addresses the range of what it means to be human,” said Dean Ellie Hisama. There is a particular challenge for the pianist: the necessity of adapting and melding with the given instrument and its space for each performance, in pursuit of true communication through overcoming each piano’s character, strengths, and limitations.

“…Relationships between pianists and pianos usually take time to develop. I would say that I’ve become very close to pianos at the rate of about one per 10 years…When you know a piano, you can speak together, you can express what you want, how you want, when you want,” said James Parker, Rupert E. Edwards Chair in Piano Performance, Faculty of Music, University of Toronto.

Since the official opening of the Edward Johnson Building in March 1964, Walter Hall (named after Arnold Walter, Dean of U of T Music, 1952-1968), previously known as the Concert Hall, has been busy hosting a variety of programs non-stop. At 490-seat capacity, the hall is designed for chamber music and solo recitals, and it houses two concert grand pianos - an unnamed Steinway, nearly 40 years old, and the McConica Steinway, dedicated to Edith McConica on January 22, 2001.

And behind the scenes, many bodies - including students learning the arts of adjustment, teachers, and dedicated technicians, are constantly looking into ways for improvement, striving to share the best of the Faculty with the wider public, making it a true community space. The Faculty’s concerts have touched many lives over the years, and in such sharing, inspirations may come to benefit the whole community - including Dr. Goh’s new gift.

“I started to imagine the piano on stage and used for its first concert: what a joyful experience it would be for me. I also felt that I cannot think of a better way to honour Lilian with the dedication of this piano.”

Dr. Goh and Lilian Wei-Chee Goh met at U of T as students in the MBA program. In the midst of a busy academic schedule and Saturday night parties, Swee and Lilian fell in love, got engaged, and were married in 1974, and one of the hobbies they shared deeply was listening to music - they even agreed that their priority for their first apartment was a proper audiophile stereo system from Bay-Bloor Radio.

“Before I met Lilian, I listened to a broad range of music genres - contemporary, folk, blues and rock,” said Swee. “Lilian however, started to introduce and educate me into listening to classical music which I embraced readily when I heard how beautiful it sounded.” Lilian’s favourite pieces were mostly for the piano, especially concertos by Beethoven and Mozart - “… partly this was due to her admiration of her younger brother who was a very talented pianist. He won an Asian piano competition and studied in Germany on a scholarship when he was only 15 or 16 years old.”

Swee and Lilian lived in Ottawa for many years, and recently returned to Toronto to enjoy retirement life. They frequented the Faculty of Music for various live performances - including the Thursdays at Noon Series, University of Toronto Symphony Orchestra (UTSO) performances, and the Toronto Summer Music Festival. “… I observed that Lilian was most enamored and enjoyed most the performances of small chamber ensembles that included the piano. I was similarly impressed with those performances as well,” said Swee.

Pianist Michelle Lin, student of Professor Lydia Wong and a winner of the UTSO concerto competition 2018-19, is keenly aware of the piano challenge: “While for many instrumentalists, like string or wind players, whose sound I often inextricably linked with their instrument, pianists are constantly adjusting and adapting… thus, having the opportunity to perform on a piano with beautiful sound and deep, colourful, and sonorous range is always a huge privilege and wonderful experience to behold. On these rare occasions, I feel like I can melt into and be one with instrument, molding and shaping the sound as if I’m experiencing the piece I’m performing for the first time again,” she said. 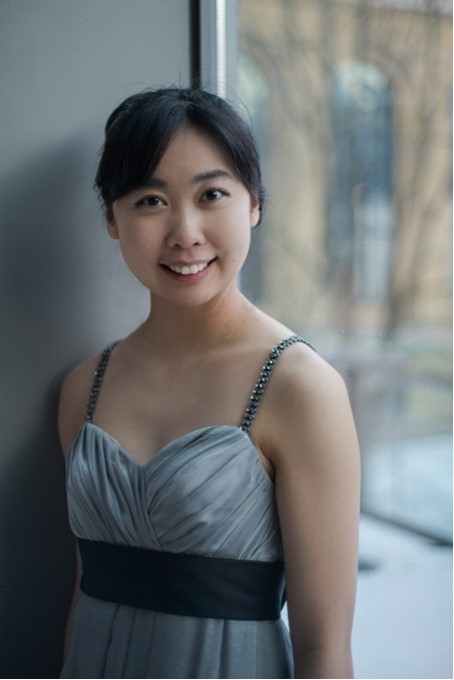 Swee and Lilian were both so impressed by Michelle Lin's performance of Tchaikovsky's Piano Concerto No. 1 in 2019.

On October 17, 2019, when Michelle walked onto the MacMillan Theatre stage to perform the Tchaikovsky Piano Concerto No. 1 with the UTSO, everyone was ready - the house, musicians, audience, and the piano. “Concerti can sometimes be the most difficult performances to prepare a piano for, as they tend to tax the limitations of the action and the stability of the tuning more than most conventional solo or chamber repertoire,” said Andrew Novosky, Senior Piano Technician at the Faculty of Music. Swee and Lilian were among the many who applauded the performance from the heart that evening.

For Walter Hall, the constant use for nearly 25 years has left the McConica Steinway in a dire situation - for the current academic year, there is a loan Steinway in lieu of McConica as it’s being rebuilt; a new piano would be a great asset. Upon hearing about the need for a new piano, Swee thought it would be a great way to share Lilian’s love for piano music, as she recently passed away after a short illness in January 2021. “… When the opportunity for this gift was mentioned to me, I had just found a program of the Michelle Lin concert that Lilian had kept. It was the only program she had kept from all the other concerts we attended,” he said.

Swee had conveyed a specific interest in donating a Steinway, and the Faculty was more than happy to work within this parameter. “I surveyed members of our piano faculty as to which brand of concert grand they preferred before Swee was involved, and Hamburg Stein was the consensus top choice, and everything aligned beautifully. Hamburg Steinways are constructed differently than their New York cousins, and the difference in cabinet materials result in a more brilliant range of harmonics, particularly in the upper register,” says Andrew. And the known history of its reliability will be a great asset to Walter Hall, given its robust performance schedule.

On August 11, 2022, a team from the Faculty of Music will be heading to Hamburg, and the selection process will be in two stages: first, test the available pianos and find the one, then secondly, Andrew will spend some time working on it to ensure that everything is in good order.

Swee, as he’s adjusting to his new chapter without Lilian, remembers back to the day of Michelle’s performance: “We were both so impressed by her performance… we discussed how good we felt after the concert, being present to see such a young talented pianist from the Faculty of Music as we walked on Philosopher’s Walk that day,” says Dr. Goh. “As I reflected on this experience, I felt that it would be wonderful to see another performance on a magnificent piano such as the Hamburg Steinway as a way of supporting these talented students as they launch their careers. I felt that Lilian would be thrilled that she would be a part of this at the Faculty of Music with the gift of this piano in dedication to her.”

Upon hearing the news of the gift, Michelle was also touched: “Especially after the difficult and uncertain 18 months drought of live performances, I was incredibly touched to hear that Dr. and Ms. Goh were moved by my performance and I am so delighted that they decided to give back to their alma mater by donating such a beautiful instrument. I am so humbled by and grateful to Dr. Goh for his generosity towards the Faculty of Music, as I had so many fond memories here meeting wonderful friends, professors, and colleagues and performing for audiences throughout Toronto and Canada.”

Recently, on his first return visit to the Faculty since COVID-19 and the loss of Lilian, Swee was touched by the return of happy memories, but also felt the sadness of Lilian’s absence; however, this gift project is bringing him a new sense of hope: “I started to imagine the piano on stage and used for its first concert: what a joyful experience it would be for me. I also felt that I cannot think of a better way to honour Lilian with the dedication of this piano. More importantly, it would be a meaningful way of supporting the music faculty and students as they are able to play, practice and learn on such a beautiful sounding piano,” says Swee.